I love children. It is an affection that has spurred me to study every fascinating detail of them.  I love their big, bright eyes, their cute gurgles, their endless ramblings on related and unrelated topics, their smell, their naughtiness, their cute and funny repartees, their cute little toes and fingers. Their ignorance.

But as much as I love kids, I do not admire them. How could I? I mean, they are KIDS. One of the greatest insults I thought I could ever get as a very grown girl from a person was when they looked me square in the eyes and allowed, “You’re acting like a child!” drop from their mouth. Now, I consider myself a quite genial person but maan, call me a kid and my head could heat up. I avoided this like the plague, had spent almost my whole life trying to prove it.
I AM NOT A CHILD.
It became my favorite mantra, a sword I would wield in anyone’s face as soon as I saw any red lights screaming, “Kid-accusation alert!” The rules were formed, I didn’t have to try so hard, society and conventions defined them.
RULE NO. 1: BE INDEPENDENT
I adopted this rule as often as I could.
Mum: “You should not do this like this. Here, let me help you”
Me: “Ugh! No, Mum! Geez, I’m not a child!”
This was the format of me and my Mum’s arguments as I grew to be a teenager. I could do stuff myself. I didn’t need anyone to teach me or help me (especially the ones I thought I could well handle). I prided myself in this. I thought it was a very…mature way of thinking.
And it wasn’t surprising when I and God started having these arguments too. ”Lord, I know I need you but surely there has to be SOMETHING I can do myself!”
Plus, I am a very rational human being. I don’t believe in Santa Clause, nor the man in the moon. I know everyone isn’t perfect, so I never trust them. If God says I’ll do” A”, boy it has to be censored by my high-beam-lie-detecting equipment. “Did he really mean that?” I think too much. And that is a good thing. Right?
But as always, God has a way of bursting my painfully inflated bubbles.
“I assure you, anyone who doesn’t have their kind of faith will never get into the Kingdom of God.” (Mark 10:15-16 – NLT)
Annnd…there goes my bubble!
Jesus dropped the bomb in carefully succinct words. So short, with no parables of any sort, that it is soo easy for us, rational-independent adults to miss.
Independent. Reasonable. These are words we love to be described by, but Jesus sunk our boats on this one. He never told us to be super strong, independent and rational. Nope, He asked us to be like a child. Kids aren’t independent or rational. They are clingy and completely unreasonable. No way was I having them as my role model. BUT, THAT IS WHAT JESUS EXPECTS!
He expects that when He tells me He’d do something as ridiculous as say…sanctify me and make me (ME, you guys!) like himself, I should just believe Him and hang to His every word. No questions or theories to explain whether he will or how he will. He expects that I cling to Him for my EVERY need including the ones I feel I am big enough to handle…like say, making my own decisions. That’s the difference, a child would believe anything his/her parents tell him/her, even something as ridiculous as talking donkeys. 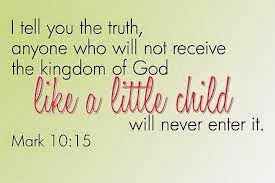 This picture of helplessness, gullibility and unshakable trust is what God wants. It trumps all my fancy “miss-independent-and-rational” fumes out the window. Funny how He seeks the little things. He doesn’t need my big muscled faith, he wants my quiet tiny mustard seed. He wants me to trust in Him like a child with wide eyed belief and no specs of suspicion, rationality or doubt.
He assures me that EXCEPT I receive him in child-like faith, I CANNOT see the Kingdom. Thus, you should know He was pretty serious. So, when Jesus said, “BE LIKE A KID,” HE WASN’T KIDDING! It was with a straight, un-laughing face. He wants me to continually look to Him with outstretched arms and wide, believing eyes. Seriously.
“Yes, I am the Vine; you are the branches. Whoever lives in me and I in him shall produce a large crop of fruit. For apart from me you can’t do a thing.” (John 15:5 – TLB).
How helpless and gullible are you?

Being a Christian is less about cautiously avoiding sin than about courageously doing God's will - Bonhoeffer
Follow Soteria on WordPress.com